Some craft images of my Manipur


This post i wish to attach some of the images I clicked of my collection that I gathered this season. 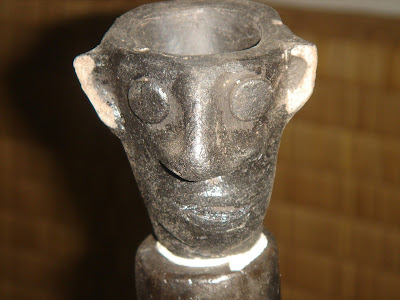 Can you guess what it could be? This is a cap of Manipuri Waterpipe. I loved the abstractness of this hand carved black stone head of hookah. 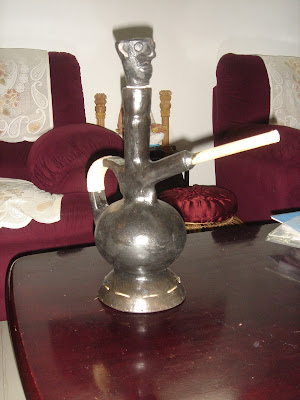 The art of  making moorah (sitting stool)  from kauna reed  in Manipur has also grown substantially from the days that i had seen as a child. Designs have become more intricate and they look attractive. 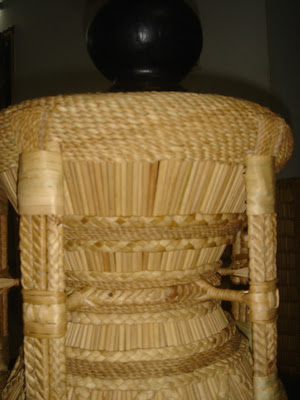 This is one strong moorha. Hookah rests on it now.. 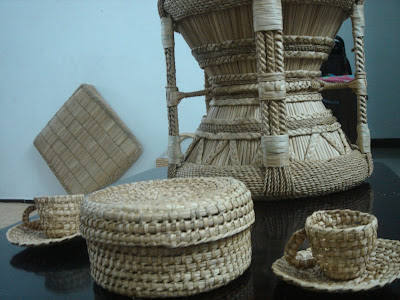 A small kauna family.  Note the kauna cushion at back, and it rests on a phak.. 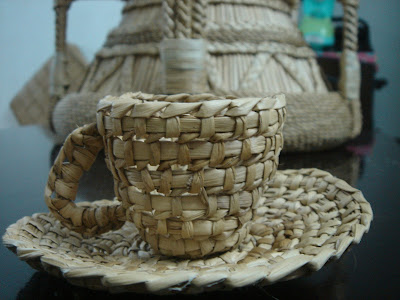 A very nice kauna toy cup for my kid. I feel the design and dignity of l labor behind it imparts in children things that plastic toys, I wonder, would seldom instill... 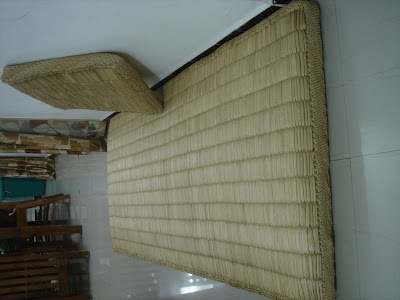 This is how a phak looks like. Ideal bed for back. specially for yoga, there is nothing more closer to nature, and oh my sturdy it is.....! 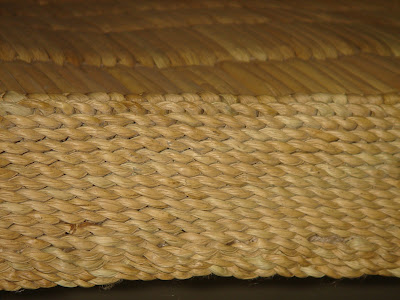 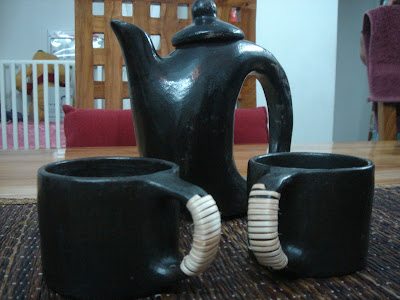 Time for a tea in the black pottery after yoga...! 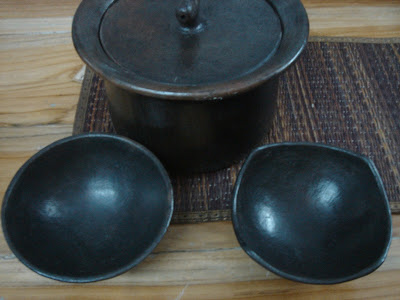 Cooking time....., the taste of food in black pottery utensils can never be got any where ! 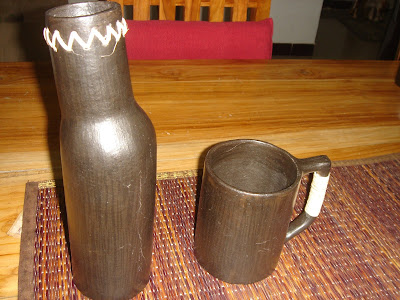 Decanter and a beer mug if u still need an appetizer...! 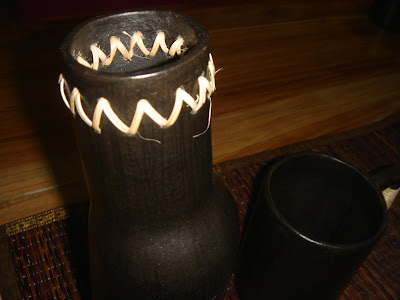 Loved the top of decanter so much; it reminds of a family garden wine...! 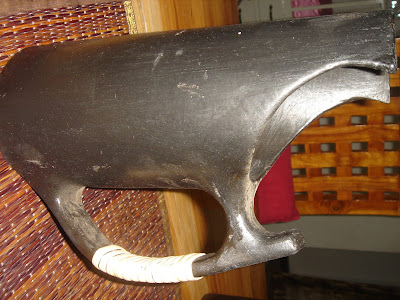 If you were wondering where the water is...! Love the way it is shaped at top. this is most comfortable way of drinking either directly or through Indian style of drinking through palm cup. 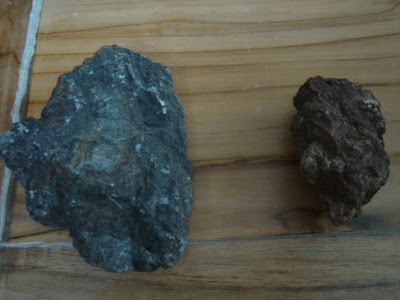 This is what goes into black pottery: 3 portions of  serpentinite stone and 1 portion of weathered rock. powdered-mixed -beaten-rolled and baked. no need of a wheel...!
Posted by Karuna's Blog at 13:17 No comments:

My trip back home after long.... 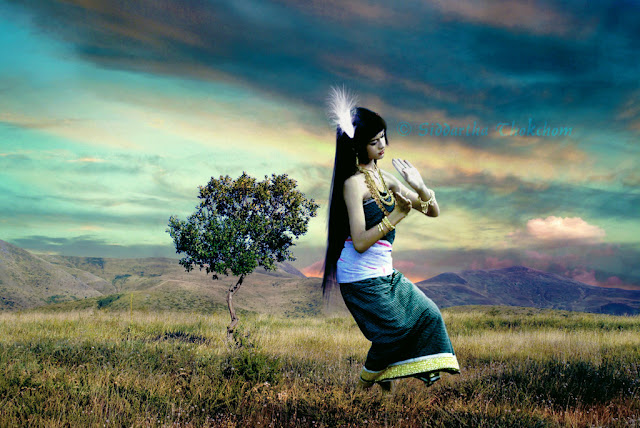 I had left Moirang long time back after my class XII, almost thirteen years ago. I had seen and studied in Dehradun and Delhi. I had discovered places, people and myself. My lovely Moirang, a small town in Bishnupur district of Manipur however has managed to resist change. Each time when I had come on vacations things have remained same. I always felt it as ossified frame of my young days.  I only feel content at its changelessness. 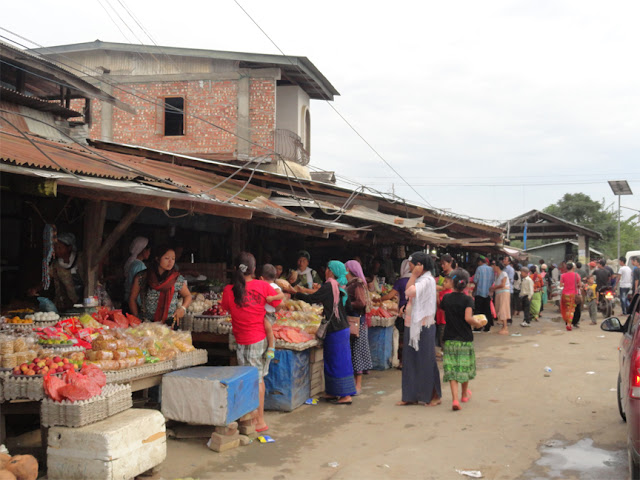 Now after I am settled in far off place and has found a stability, i often feel a beacon from Manipur, things that perhaps I took for granted, its people, its places, its fields, its violence, its blockades, its women, its skilled and hardworking craftspersons; I think it needed discovery. Discovery for me.
I can only feel proud being a woman from Manipur; they have stood not only India in good stead but have given a meaning to womanhood itself. I never observed the hard work, the dedication and the finesse the women in Manipur bring when they sit on craft. And my journey around the country make me learn that what fine artist they are, and also how underpaid they are. The crafts persons in Manipur are the tough people who fight through the poverty but unwittingly produce master pieces each time, leaving a personal stamp on each piece. I remember when I visited Lamlai (a small village in district of Imphal East) to see a relative of mine, saw how the young girls of the family adept at silk saree weaving were care full in wiping their hands of sweat each time by a clean cloth; controlling their sneeze each time there was an urge, so that there is no blemish of any kind on that saree that they would take seven hours of gruelling work for ten days to finish. 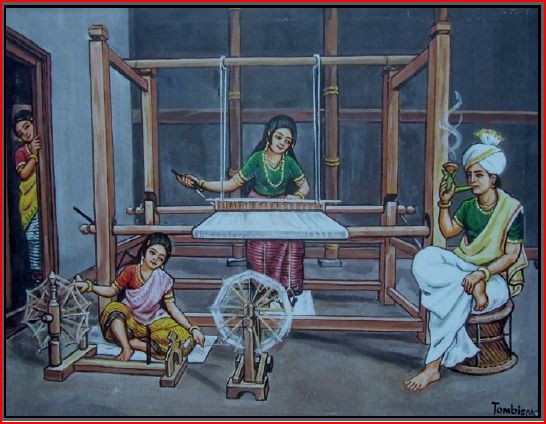 It would mean 70 manhours of work to ready a saree of spotless finesse. The price at which they can sell this masterpiece with brilliant colours and traditional patterns, when I discovered me shocked me out of my wits.

Kauna Phak:
A unique craft of Manipur is the double-weave mat known as the kaunaphak reed mat. Kauna work is mostly done by women. But unlike the weaving that is exclusive fortress of women, men contribute in this craft. The kauna craft is the most natural and stylish product range that I have encountered, and have often missed it outside. Kauna reed is used to make phak, a heavenly alternate to mattress, cushions, baskets and other decoration works. The reed used to weave the phak (mat)  is called kauna which is the succulent stem of a plant that grows in water. Kauna is a kind of reed that mostly grows in wetlands and marshes. Reeds are carefully chosen for the mats. The plant is cut only when it has reached maturity. It is cut thrice in a year. However, it should be carefully watched for the amount of water around it when it  grows. If large amount of water is there then the stem of the kauna becomes large which is not preferred. On the other hand if there is less water, then it would be too weak. Once cut, the stems are dried to make them soft, pithy and quite brittle. A bunch of cut stems of the appropriate length are then woven with bamboo placed at suitable distances to give the mat its desired length. The border has an interesting pattern and is about an inch wide. The kauna reed mats are not meant to be washed for the reed spoils with moisture. I was told that crafts persons often found their phak on TV as they are used in posh hotels and yoga programs. I found that a substantial export market exists for this trade through Delhi, and most phaks madde here end up in UK, Holland, Germany, France UAE, and even Latin Americas. However the remuneration for this craft to the women is again paltry and they just manage to meet their ends meet.
They need no potter's wheel
The black pottery of Manipur has always enamored me and I have often found the world so unaware of it. During the lectures in History that I was taught in advanced courses I often found my self not sure of the direct relationship that I was told exists between discovery of potter's wheel  and beginning of sedantism.   The black pottery is made without the wheel and has stored grains and other essentials for Manipuris for ages. This  is a unique pottery which is handcrafted by Thangkhul tribe of Ukhrul district, Manipur. The ingredients of this pottery are found only in a single village called Longpi which is inhabited by around 400 houses and this art is carried out by only 200 artists. It is a long process to finish a product and perhaps can  take at least  up to a week. The mixture of black serpentinite stone and weathered rock is the material which is mixed in a three to one ratio in making black pottery. The pots are made by a “coil method” where the paste formed ingredients is then rolled by hand into desired shapes.  And,  then are put in a kiln and set on fire for around five to nine hours till it reaches 900 C. After which it is polished with local leaves called pasania pachiphylla (scientific name) which provides the luster to its surface.  It is very hygienic and eco-friendly as there are  no chemicals or machines used.
Utensils made of black pottery are used during major occasions like marriage and other important festivals for cooking meats. I also learnt that the black stone pottery is fire proof and also Gas and Microwave friendly. It can be used as normal regular utensils and can also be washed by any dish washers. Food cooked in these pots gets a distinctive flavour and hence an enhanced taste.

I also happen to meet a young student in Longpi, who is studying in the same University where I did my education from. Discussions on issues of local politics, economics and campus refreshed me.